I won an e-copy of this book and decided to give it a go. It is LitRPG (Literary Role Playing Game) wherein the world functions on game mechanics: people have screens, stats, quests and the like. It is a fairly new and growing genre that exploded into popularity with Dr Aleron Kong's The Land series. I find it to be entertaining.

So Equalize by Ryan Debruyn is set in modern Earth at the start, no magic or game systems, then Gaia (the Earth) wakes up from her eons long nap, sees what we'd done, and then starts "fixing" it. Magic comes back with a vengeance and reality changes, monsters appear and devastate humanity. Within days over half of humanity is dead. The Main Character is on a mope-fest nature retreat when this happens and lucks into empowering acts. Ostensibly determined to locate and save his sister and mother he heads back to civilization. Along the way he gets a monster pet, a ghost guide, and a host of problems. Eventually he's finds a rotten egg military holding civilians as serf labor for their own protection against the monsters and decides he must rectify the situation.

The main character reads like a hormonal teen jumping from anger to laughter and back and often thinking he knows best. (Kill a guy then look at someone and think how pretty she is. Sociopath, much?) The ghost guide is a the leading lady and is just as bad. She's a general and soldier of wars and fought on multiple worlds, she's been around the block, but she reads more as the everyday neighbor girl and is clearly written by a man. (Prime example is she wakes up and cups her breasts...really?!) The main from time to time says he's out to save his family and gives token service to this, but takes every excuse to put it off. Often he even seems to forget that that is his goal, until of course the McGuffin is needed again to humanize him. A personal peeve was the portrayal of merchants a greedy dishonest price gougers with a laissez faire, caveat emptor attitude. (Seriously, merchants try to take each other out, not the customer. Con-men go for the customer.)

Even with those, the book was enjoyable. The writing style captivated. The pace was pretty fast, and the was a lot of action. The MC was NOT perfect and made mistakes and paid for them now or in the future. The world building was fascinating and layered, without being too bulky or detailed. The game mechanics were present without being too forward or detracting from the telling. I did enjoy the book and will continue the series. But I do hope the MC "grows up." ;-)
Posted by Jonathan at 7:36 PM No comments:

Today I Lost My Mother

On Saturday, April 9, 2016, my mother passed away. She had been recovering from breast cancer for nearly a year and laid down for a nap to die in her sleep.

The days that followed were a whirlwind of chaos and tasks. The funeral had to be arranged. Family had to be gathered. Finances had to be looked into. There was no time to rest, no true time to stop.

Now the funeral is over. Family is leaving. Finances still need work, but nothing can truly be done until the Death Certificate comes in a few weeks.

Now I have time to be alone, time to realize that she is gone. In this life I shall not hear her voice again, I shall not see her smile, feel her hugs. Saturday my mother died, today I lost her.

I made a book

I've been wanting to try book binding for a while, and this last week (July 1-2, 2015) I finally tried it.
I started simple and went for a sketchbook.

I used some manila drawing paper I had for the pages. I halved the 8x10 pages. I then folded the resultant 5x8 pages in half and sorted them into signatures of four sheets. I punched holes along the fold every 1/2 inch leaving 1.5 inch on each end. I sewed the signatures together forming a text block. I glued the spine.  Then added some dark brown card stock cover pages on front and back, and glued a paper support strip along the spine. I used a craft knife to trim the edges. I cut some picture matting to size for a cover, glued on some fabric, and then glued the cover sheets to the inside of the cover.

I know, I know, you didn't need the details.

Anyway, I think it was a decent first effort. I can see see where I could do better next time. It was a quick fun project; one I'm proud of. Next I'm going to try binding some printed text and see how that turns out.

Here's two photos. I know it's hard to tell anything about the book, still bragging rights. Thanks. :-) 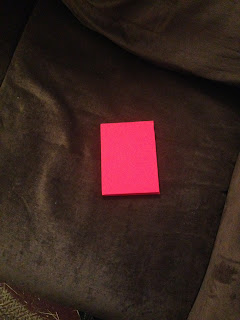 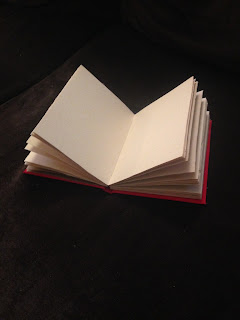 Posted by Jonathan at 7:52 PM No comments: